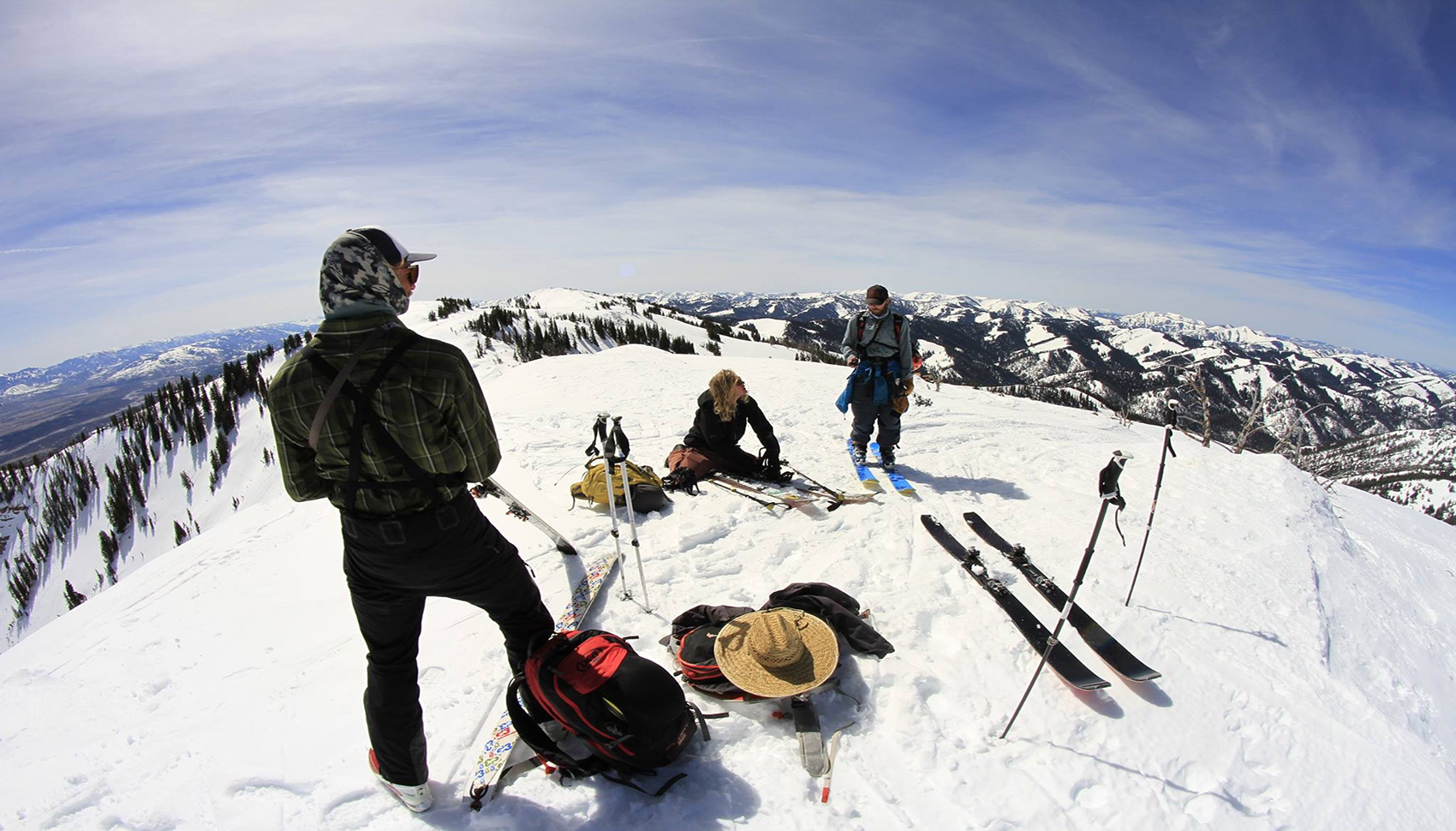 Imagine this: it’s week three of your Wilderness Adventures trip and you are zipped up into your mummy sleeping bag, listening to the heavy breathing of your sleeping tent mates. You know that you should sleep too, but your mind is racing because tomorrow you begin your two-day climb of the Grand Teton! You need something to take your mind off of the excitement of what’s to come. You head over to your van’s gear trailer, which is open because your trip leaders are still up by the fire planning for the big climb. There, perched on the trailer’s edge, is a blue box labeled “The WA Book Box”. You pop off the box’s lid and sweep your headlamp beam across the selection before you. George Hayduke scowls at you from the cover of The Monkey Wrench Gang, A Pair of Kestrels are perched on Peterson’s Field Guide to Western Birds, and a blue planet floats in the night sky of The Earth Speaks.

Since the very beginning in 1973, each Wilderness Adventures trip group has travelled with a book box – a traveling library full of poetry, field guides, novels, and legends. Some books are specific to a trip’s region while others are on every WA trip across the globe. Here’s our list of the top 10 books to look for in your book box!

“Whenever and wherever men have engaged in the mindless slaughter of animals (including other men), they have often attempted to justify their acts by attributing the most vicious or revolting qualities to those they would destroy; and the less reason there is for the slaughter, the greater the campaign of vilification.”

Although Never Cry Wolf is far from pure nonfiction, Farley Mowat’s tale of a season spent living alongside a wolf pack is riveting. This is a book that changed the public image of the wolf from bloodthirsty blight to majestic keystone predator. It stays energetic and funny the whole way through, and is a must read for any teen who is traveling through wolf country (Yellowstone Wilderness, Yellowstone Teton, Alaska Southcentral).

“This is our body. Drawn up crosslegged by the flames

Laughing on the Great Earth.”

Legendary beat poet and Zen Buddhist Gary Snyder won the Pulitzer Prize for poetry with this collection in 1975. His poems viscerally communicate his love for nature, family, and simplicity. In “Four Changes,” the penultimate final section, Snyder tackles big environmental problems by sketching a to-do list for humanity. This is a great book to flip through by a backcountry brook (Oregon Cascades Explorer, Montana Fly Fishing, High Sierra).

“One man alone can be pretty dumb sometimes, but for real bona fide stupidity, there ain’t nothing can beat teamwork.”

Never before or after has a book been written that seamlessly alternates between graceful depictions of nature, nail-biting car chases, and stoic philosophical points, hidden under a veneer of indelicate banter. In his most famous novel, Edward Abbey follows a ramshackle crew of environmentally motivated saboteurs as they wreak havoc across the canyon lands of the desert southwest. It’s a must-read for anyone traveling to canyon country (Utah Red Rocks, WALI).

7: Indian Legends of the Pacific Northwest by Ella E. Clark

“During the great flood, three women drifted away. After the flood, the Changer came to make the world over. He transformed the sisters into a mountain with three peaks. It is the Sister’s peak up there by Mount Baker.”

Local legends and folklore enable WA leaders and students alike to grasp a greater understanding of the culture and history of the wilderness areas and wild spaces through which they travel.  There’s The Raven and the Totem a mischievous book of Tlingit and Eskimo creation stories for Alaska Southcentral, Campfire Tales of Jackson Hole for Jackson Hole Explorer, and Coyote Tails: Legends of the Nez Perce People for Montana Wyoming.

“If I had influence over the good fairy who is supposed to preside over the christening of all children, I should ask that her gift to each child in the world be a sense of wonder so indestructible that it would last throughout life.” -Rachel Carson

At Wilderness Adventures, we don’t teach any specific ecological curriculum. This is because we believe in the power of wilderness experience unencumbered by categorization. That being said, we travel through some of the most fascinating ecosystems in the world and curiosity-based learning is encouraged on, and empowered by, our trips. Every book box contains field guides, pamphlets, and maps on the local flora, fauna, and geology of the places we go.

5: The Best of Robert Service

“There are strange things done in the midnight sun

By the men who moil for gold;

The arctic trails have their secret tales

That would make your blood run cold;

But the queerest they ever did see

Was that night on the marge of Lake Lebarge

This refrain has been chanted spookily over many WA campfires over the years. Robert Service, AKA “the Bard of the Yukon,” was born in England, but his most famous poems came from his time spent in Whitehorse, YT. He writes of miners, trappers, soldiers, starvation, frostbite, violence, revenge, and even love in his cheeky, lyrical poems. They are best read out loud by a crackling fire (Alaska Southeast).

4: Desert Solitaire: A Season in the Wilderness by Edward Abbey

“Men come and go, cities rise and fall, whole civilizations appear and disappear-the earth remains, slightly modified. The earth remains, and the heartbreaking beauty where there are no hearts to break… I sometimes choose to think, no doubt perversely, that man is a dream, thought an illusion, and only rock is real. Rock and sun.”

Desert Solitaire is one of the greatest works of early environmental philosophy. Ostensibly a memoir of Abbey’s time as a park ranger in Arches National Park in the late 1950’s, Desert Solitaire includes vignettes of Abbey’s adventures and misadventures in canyon country, polemics against urbanization and development in National Parks, and meditations on desert ecology. In “Down the River,” the author and a friend raft through Glenn Canyon for the last time before it was flooded by the construction of the Glenn Canyon Dam.

“Forget not that the earth delights to feel your bare feet and the winds long to play with your hair.” -Kahlil Gibran

This is one of three books that you will find in every WA book box across the globe. It is divided into three parts: Earth Magic, Earth Wisdom, and Earth Spirit. Each section contains poems, prose, and quotes from conservationists, environmentalists, philosophers and authors (including half of the authors in this very list). A carefully curated collection, any page you open to will give you something to think about (Alps & Pyrenees).

2: On the Loose by Terry and Renny Russell

“It feels good to say, ‘I know the Sierra,’ or ‘I know point Reyes.’ But of course you don’t—what you know better is yourself. And point Reyes and the Sierra have helped.”

A picture is worth a thousand words, and this book is full of them. The authors are careful with the sparse words that they sprinkle through their evocative photo journal. On the Loose tells the story of two brother’s nomadic adventures throughout the West Coast in the 1950’s and 1960’s. No book better translates the sense of peace and creativity that accompanies wilderness adventure. Be sure to flip through this book on California Explorer or California Discovery.

During your trip, there isn’t always time to sit down and tackle a novel or a memoir, but there is one book that gets read on every Wilderness Adventures trip. The quote book is passed on throughout the trip to each leader of the day (LOD) so that she or he can select quotes to read before digging in to breakfast, lunch, and dinner. The WA quote book is an ever-changing collection of wisdom from famous authors, musicians, and even WA visionaries.

5 Reasons We Love to Visit Wyoming

7 Benefits of Working at a Summer Camp

5 Tips to Teach Your Kid How to Fish