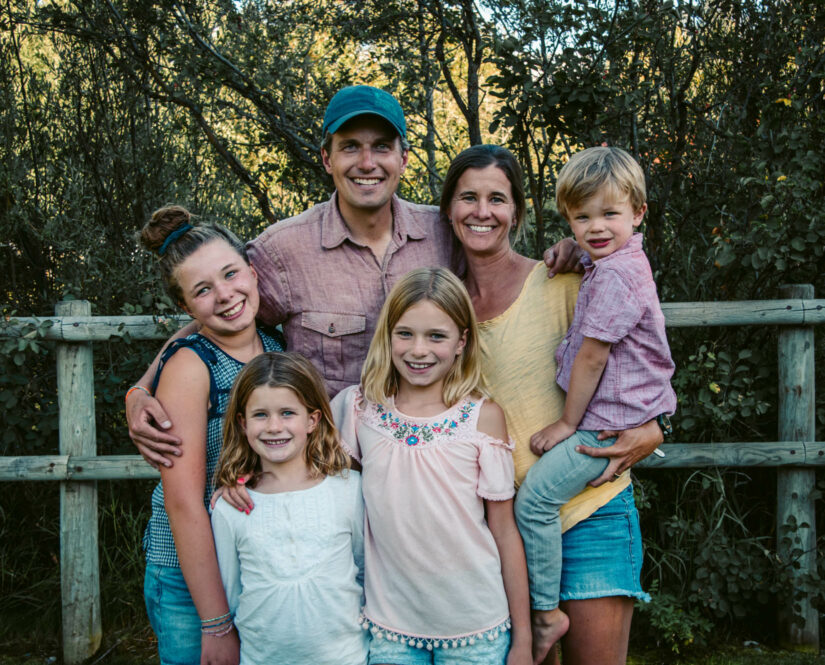 Originally from the midwest, Tom and Catherine Holland are proud to be members of the Wilderness Adventures team.

Tom attended Wilderness Adventures as a teenager and discovered a passion for adventure and outdoor education during this time. The program led him to get involved in the summer camp industry while in college. An award-winning educator, Tom spent three years teaching social studies at the secondary level before he left the classroom to work at a camp in northwest Wyoming eventually serving as the Executive Director, a role he held for six years. In 2013, he went on to work for the American Camp Association and held the roles of Chief Foundation Officer and Chief Executive Officer.

Known as a leading expert on the camp experience, Tom has spoken at both national and international conferences on youth development, the camp experience and children in the outdoors. He holds a B.A. in secondary education and an MBA from Washington University in St. Louis. Tom is a board member of the Grand Teton National Park Foundation and City Kids Wilderness Project.

Catherine’s passion for teaching children in the outdoors is partnered with her passion for nutrition and the culinary arts. As a registered dietician with a B.S. in culinary arts from Saint Louis University, she has always brought a wealth of knowledge to meal planning and food preparation for backcountry trips. In the world of camp, Catherine has served in a variety of roles including head chef, assistant director and director of a summer camp in northwest Wyoming. Outside of camp, Catherine has worked as a registered dietician and certified diabetic educator at the hospital in Jackson, Wyoming.

Both Tom and Catherine enjoy volunteering in various capacities in the Jackson Hole community and love to get outside with their four kids.

Director of Marketing and Sales

Carly was born and raised in Kalamazoo, Michigan. During college, she found her way west in the summers to begin her work in the summer camp industry. Completely taken with the beauty of Wyoming and the important work of summer camps, she relocated full-time to Jackson. After 12 summers working at a residential camp outside of Jackson Hole, Carly decided it was time for a new challenge and adventure, and made her way to Wilderness Adventures. Carly currently lives in Salt Lake City, Utah and she and her husband enjoy skiing, hiking, fly fishing, and playing outside with their 2 kids, and pup, Nellie.

Born in Hamden, Connecticut, Tim got his start in the outdoors by going on trips with his local scout troop. He spent summers working at residential camps and science programs in the east, eventually finding himself at Wilderness Adventures, leading trips in both Yellowstone and Alaska. For college Tim attended the University of Vermont, studying Animal Science, as well as Parks, Recreation, and Tourism. Tim was the Vice President of Operations for the UVM Outing Club and was heavily involved in the Department of Outdoor Programs. Today you can find him mountain biking, skiing, backpacking, or doing anything that involves some fresh air. Tim is excited to coordinate trips that will give youth from all over the world the opportunity to grow, make friends, and experience adventure.

Ez was born in Texas and attended Northeastern University in Boston. Their study abroad program in Tanzania sparked their interest and love for the outdoors! After university, they began working in outdoor education in Washington and California so that they could live outside and share their sense of adventure and passion for the environment with youth. Their favorite spot to teach was on Catalina Island because of the diverse marine life and beautiful hikes. They first worked at Wilderness Adventures as the Trip Photographer in 2019 and are stoked to be back on the year-round team as a Program Expert! Now residing in Fort Collins, CO, Ez enjoys spending time hiking, roller-blading, rockhounding, and hanging outside with their dogs, Cora and Junie.

Grace grew up in Columbus, Ohio, where she would often spend summers traveling with her family up north to serene lakes of Michigan and out west to the vast landscape of the Rocky Mountains. She eventually found her way back out west to attend college at Regis University in Denver, Colorado where she greatly developed her leadership and team-building skills as a member of the Women’s Lacrosse Team. As a WA student in 2013 and 2014, Grace’s passion for the outdoors quickly grew, and she found herself back at Wilderness Adventures leading trips in 2018 and 2019. Grace’s home base is now in Salt Lake City where she spends much of her time biking and hiking with friends in the Wasatch Mountains.

An Arizona native, Will grew up playing around in the Sonoran Desert and Coconino National Forest; camping, riding, and boating with his family. Wanting to live up in the mountains, Will moved up to Flagstaff, Arizona where he earned a B.S. in Outdoor Education and Leadership from Northern Arizona University in 2018. With a passion for teaching in wild spaces, Will began a life of seasonal work after college. He worked as a Trip Leader for Wilderness Adventures, leading the Leadership Institute courses around the Rockies and the Southwest. During the winters, Will worked as a ski instructor at his local hill in Flagstaff. He now resides in Jackson Hole, WY, where you can typically find him out skiing, climbing, slacklining, or fishing with friends! He is always striving to get outside and “Do Something Wild”!

Isabelle grew up in Massachusetts and spent summers outside camping and hiking in New England with her family. She earned a B.S. in environmental science at the University of Massachusetts, Amherst. Studying the incredible ecosystems in our planet inspired her to travel during the summers to experience them herself. Her travels landed her in Yellowstone, Yosemite, and Tanzania where she either worked or studied and spent her days off adventuring in the beautiful landscapes. After graduating, she headed west to work in the outdoor recreation industry to share her passion for the environment with a younger generation. She now resides in Boulder, CO where you can find her hiking, rock climbing, skiing or hanging out with her cat Banjo.

A New York native, Maggie’s love for the outdoors started at summer camp in Maine, where she spent 13 summers as both a camper and counselor. Looking for a change of scene, Maggie joined the Wilderness Adventures crew in 2019 to lead trips on the West Coast and in the Jackson Hole area. After graduating, Maggie worked as a 3rd and 4th grade teacher in New York City, traveling to Jackson to serve as the Base Camp Director during the summer months. Maggie loves sharing the magic of summer camp with her campers and staff. Now based in Jackson Hole,  Maggie can be found knitting or playing in the Tetons.

Rachel was born and raised in the small town of Pottsville, Pennsylvania. She developed an affinity for the outdoors at a young age from being introduced to the wonders of nature by her parents and spending many summers outside with family in Pennsylvania, Vermont, and Maine. Rachel attended Penn State University where she earned a B.S. in Recreation, Parks and Tourism Management with a focus in Outdoor Recreation and Environmental Interpretation. After working for a variety of outdoor education organizations, Rachel found a special connection to Wilderness Adventures and went on to lead for three years. Over that time, she led several trips ranging from Gap Semesters to Campout. Rachel is passionate about the connections made on Wilderness Adventures trips and the lasting impact they have on students and leaders alike. When she’s not working you can find Rachel rock climbing, hiking, skiing, and karaoke-ing.

Katie was born in North Carolina, grew up in Connecticut, and migrated out west in 2014 to study Environmental Humanities at Whitman College in Washington. Her love for the outdoors blossomed while living in the west, and she spent most of her college years playing outside and working as a Trip Leader and Trips Coordinator for the Outdoor Program at Whitman. During the summer months she led trips for Wilderness Adventures (Alaska Southeast and Utah Red Rocks) and NOLS, and spent the post-college off seasons living in a variety of locations and working mostly as an educator in different capacities. She taught English in Northern Thailand, worked as a Resident Wilderness Educator at a semester school in North Carolina, sold gear at REI, and eventually found her way back to Wilderness Adventures where she currently works as a Regional Trips Coordinator. She now lives in Bozeman, Montana, where she spends her free time rock climbing, skiing, biking, reading, and playing guitar with friends.

A proud midwesterner, Charlie grew up exploring the lakes and forests of Wisconsin and Northern Michigan. Charlie studied economics at the University of Wisconsin-Madison, where he also took on leadership roles with Outdoor-UW, guided freshman orientation trips and studied abroad in Aix-en-Provence, France. After graduation, Charlie worked in the outdoor industry in Northern Michigan and Alaska and joined the WA team as a regional trips coordinator this fall. Charlie now lives in Salt Lake City, where he and his dog, Aldo, can be found hiking, biking, climbing and fishing.

Jane grew up on a lake in Madison, WI which sparked an outdoor lifestyle. She followed her older brother to Montana State University, which fueled the love of the mountains. Then Jane moved to Jackson, WY with her husband and worked for a summer camp outside of Jackson for many years. Getting kids outdoors became a passion and she has been onboard with Wilderness Adventures since 2016.

Jane, her husband and son are all avid outdoor enthusiasts and love to fly fish, camp, hike, bike and ski!